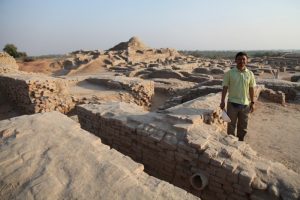 This city in the Indus Valley on the territory of modern Pakistan attracted the attention of scientists in 1922. The walls of baked bricks, the perfect layout of neighborhoods and buildings, the presence of plumbing and sewage said that in ancient times there was something great. Subsequently, it turned out that the city was built around 2600 BC. e., which means that he is a contemporary of the civilizations of ancient Egypt and Mesopotamia. However, according to archaeologists, all its inhabitants died almost instantly. Why?
There were even plumbing and toilets
The ancient city of researchers gave the name of Mohenjo-Daro, which in some Indo-European languages ​​means “Hill of the Dead.” But the cause of his death has not yet been solved. END_OF_DOCUMENT_TOKEN_TO_BE_REPLACED