Riddle of Alexander of Macedon: Why “the flight of Tsar Alexander” was popular in Russia and throughout the Christian world 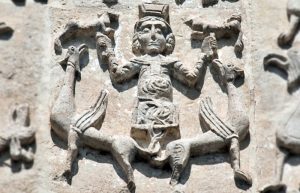 A unique pectoral cross was found on the land of the former Drutsk faction, which emerged in the 11th century on the way “from the Varangians to the Greeks”. Crosses with the image of the Crucifixion from this period have come down to us a little, the image of the Crucifixion is much more common on encolpions, but this is not the main thing. Not for nothing, the cross from Drutsk was found on the way from the “Varangians to the Greeks”, some “Varangian”, Scandinavian features are present in the design of the cross, but this does not make it unique. Of particular interest is the image on the back of the cross.
The crucified Christ is depicted with closed eyes – it means already dead on the cross, but the head is straight. Above the cross nimbus is a depressed inscription ICXC. With the increase, the depressed points are visible not in the palms, but above the wrists, depicting nail heads. It should be noted that the image of Christ was realistic and the master knew perfectly well where nails were crucified when they were crucified. The bent fingers of the left palm indicate that the master could be a representative of the western school. But in the initial period of the division of the iconography of the Crucifixion into Orthodox and Catholic, deviations from the Russian masters are also possible.
However, the most interesting is located on the back of the cross. In sredokrestiya is a sitting figure in a raincoat. Around this figure, unrolled in profile, at the ends of the blades of the cross are images of four birds, along the silhouettes of very similar to the images of eagles with wings ajar. Birds are depicted in characteristic postures with their heads turning in one direction, which implies that they perform the same actions.
If we discard stereotypes, then this image is nothing more than the plot “Alexander the Great’s flight to heaven”, which was popular during the Middle Ages. What makes such a conclusion?
We will analyze in more detail. The image of this plot, well-known in Russia, was embodied in decorations, carving and architectural decoration.
“Flight of Alexander” was popular throughout the Christian world. The photograph (B) is a sample of the Bulgarian version of this image. The plate comes from a hoard found in Preslav the Great and dates from a period up to 971 years. In the photographs (A; B) the diadem and central plate from the treasure found in sec. Sakhnovka and stored in the Ministry of Foreign Affairs. The work is dated mid-XII century. The central plate – a fractionator similar to the diadem (H), dated by the XIII century, is kept in the museum named after Andrei Rublev.
The iconography on the cross from Drutsk differs significantly from the iconography of this plot, common in medieval Russia. However, it can be assumed that the image on the cross has a much more ancient tradition. The flight of a man to the sky was originally supposed on the largest and most powerful birds known to man – the eagles. The earliest evidence of this is the flight of King Ethan from the Sumerian myth.
This image, created more than three thousand years before Christ, very much resembles the composition of the Crucifixion with the Sun and the Moon on either side. The myth of the king’s flight to heaven exists among many ancient peoples. In the old Roman tradition, which later passed on to Byzantium, the flight of Alexander the Great was described as follows: “Alexander ordered four strong birds to be harnessed to the throne, who were not allowed to eat for three days. He himself sat on the throne and raised high two spears on which pieces of meat were tied. The birds, striving for the latter, lifted the throne with Alexander to the air. At high altitude, Alexandra met a bird with the face of a man and ordered him to return to the ground. When Alexander looked down, he, deep beneath himself, saw a huge serpent coiled into a ring and a small platform in the center of the ring. The bird explained to him that the snake is the sea, and the platform was the land surrounded by the sea. By the order of the bird, Alexander lowered his spears, and the birds flew down and safely lowered him to the ground, but so far from the place of take-off, that he only with great difficulty managed to reach his troops. ”
As can be seen from the above, four birds are the basis of lift for traveling to heaven.
We also see four griffins on the miniature of 1320. Probably, in the Western tradition, this option took place. But there is a description of the flight and with two birds. Obviously, this plot became the basis of the classic Byzantine variant.