<a href="http://thisismyurl.com/downloads/easy-random-posts/" title="Easy Random Posts">Easy Random Posts</a>
What did the ancient Roman city of Herculaneum look like, buried under the lava of Vesuvius?Herculaneum is one of the three cities that fell victim to the eruption of Vesuvius in 79 year. The ruthlessness of nature, which destroyed the inhabitants and their homes, impresses… 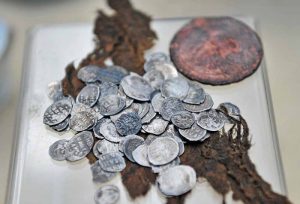 However, to make a find, it is not necessary to go underground. There are 10 unexpected and strange artifacts that have been discovered on the surface of archaeological antiquities.
1. “Augustus is divine”
10 incredible finds of ordinary people
Coin of Traian-Augustus “August the Divine.”
Israel
In 2016, tourist Lori Rimon was walking in the eastern Galilee (region in northern Israel). When she passed through the archaeological site, she accidentally noticed a yellow glow. In the grass lay an old coin. Transferring it to the authorities, Rimon was surprised to learn that the coin was about 2,000 years old. And the fact that there is only one coin of this kind is absolutely exceptional.
An extremely rare coin was minted in Rome in 107 AD, and the faces of two Roman emperors were depicted on it. On the back you can see the profile of Trajan, surrounded by symbols. At the front, the words “Augustus Divine” surrounded the face of Augustus. This gave the artifact a special unusual. In most cases, the emperor Traian was depicted on both sides of the coin. The coin will remain in Israel, in contrast to its identical copy belonging to the British Museum.
2. Lotsberg Pass Cave
Ancient shelter on the pass Lotsberg.
Switzerland
One day, Beat Dietrich in 2011 brought the dog for a walk. Given that he was the caretaker of the Alpine hut in Switzerland, it is not strange that Beat went for a walk to the high mountain Lotsberg pass. There he noticed ancient pieces of wood and pieces of leather. Archaeologists were able to inspect his discovery before the snow made this place inaccessible until 2017.
During the excavations, an ancient refuge was found near the highest point of the pass (at an altitude of 2700 meters). Inside we found personal items left by an ancient climber. About 4000 years ago, a hunter or a shepherd (or maybe a small group of people) used a natural cave. Then, for some reason, they left her, leaving arrows, a wooden box that once contained flour.
Also found were four pieces of elm bows, leather strips and a container made of horn. The Bronze Age collection contains the most ancient artifacts ever found on this pass. They also provide evidence that Lotsberg has been used for centuries by traders, hunters and shepherds.
3. “The cult of the head”
Female skull from Somerset.
England
A few years after Bit Dietrich brought the dog for a walk in the snow, another man also went out into the countryside with the dog. Roger Evans walk in 2017 along the River Sowie in Somerset ended up with the police. And the reason was that Evans found a female skull.
It turned out that the police could do little because the woman died at the age of 45 … during the Iron Age. According to experts, the unfortunate who lived somewhere between 380-190 BC, cut off her head. The nature of the wounds indicates that this was done intentionally.
It is unclear whether this was done when she was alive or already dead, since the bodies were not found. Soon, other skulls were found in the river. Most likely, they were thrown into the river in the Iron Age during some act of worship. The new find adds evidence to the theory that during the Iron Age there was a Celtic “head cult.”
4. “Diadocho wars”
The cave storage, used for thousands of years.
Israel
After the death of Alexander the Great in Israel, his heirs fought with each other in the so-called “War of the Diadochi”. At about the same time, 2,300 years ago, someone had hidden valuable items in a cave in northern Israel. The vault remained unopened until three people found it in 2015.
Speleologist Reuven Zakai, his 21-year-old son, Hen Zakai, and their friend Lior Haloni, studied stalactites in a cave in northern Israel. Hyun made his way into a particularly narrow space in the cave and found a hidden treasure there. Initially, he noticed only two coins, rings, bracelets and earrings. Most of them were made of silver.
The men reported their discovery and later returned to the cave with members of the Israel Department of Antiquities. As a result, many artifacts were found, including ceramics dating from 3000 to 6000 years. Archaeologists believe that things were placed in a cache for preservation during times of turmoil and war by local residents after the death of Alexander the Great.
5. Chelichnus gigas
Traces of an ancient reptile Chelichnus gigas in Nevada.
USA
A few years ago, Tom Cloff was walking with friends in Clark County in Nevada. He planned to show his comrades the fossil footprints that he had discovered earlier. Tourists stopped for lunch for a picnic and noticed traces on the rocks below, which, as it turned out later, belonged to an ancient reptile called Chelichnus gigas.
It turned out that the creature had no tail, and on its hind legs there were three fingers. Although today this place is a desert, when a 60-centimeter reptile went somewhere for business 290 million years ago, the earth was swampy.

with such a mass nitrogen compressed protects babies errors that had volcanic rock ancient relatives life of the people those adopted new discovery able to handle product looks scientist makes entire skeleton different frames along pre-cut lines decorative notches honor of his benefactor made of wool large relief house animals needed during the Iron help a woman avoid transmitting information priest named ancient text metal tools legends associated probably record Only small wearable assumed that people wooden buildings ornament of raincoats rights to men archaeological treasures buried with him animals wore mostly utilitarian coasts of ancient even punished the slaves largest fossil studied stalactites publication of this text freshwater lake people whose names objects to skeptics
Graffiti of the first Christians, the Egyptian tomb and other unique artefacts found on islands hidden from civilizationThere are thousands of islands in the world. Many of them have their own rich history, culture and secrets. Given the natural isolation, a strange culture for the rest of…