<a href="http://thisismyurl.com/downloads/easy-random-posts/" title="Easy Random Posts">Easy Random Posts</a>
Strange ancient artifacts, the origin of which no one can explainThe world is full of strange and mysterious artifacts. Some are almost certainly hoaxes, the others are connected with real stories. In our review of the 10-ka real artifacts, the…

How did dog collars change from ancient Egypt to the present day: Thorns, castles and diamonds 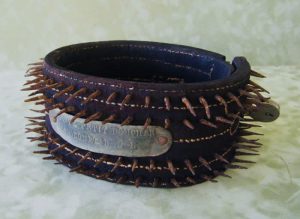 Dogs have been accompanying humans for thousands of years as loyal helpers, protectors, and companions. Today it is no longer known who first thought of putting a dog collar on the dog and under what circumstances this significant event happened. But we know something about how the collars looked in antiquity and how long the dogs began to wear them. Thanks to the extravagant dog collars of past epochs that have survived to the present day, we can judge the history of the use of these intelligent and faithful animals by our ancestors.
Egyptian artwork
As you know, the ancient Egyptians loved their cats very much. However, they loved dogs no less. They were also worshiped, honored as hunters and defenders, and the dog always had the privileged position of his master’s companion in the hunt.
Despite the fact that we are separated from the ancient Egyptian civilization for thousands of years, even then dog owners actively used collars and leashes. The oldest of them, discovered by archaeologists, date back to 3–3.5 millennia BC. Moreover, their production and processing were at such a high level that, unlike everyday modern analogues, the collars of ancient Egypt can be called real works of art.
Most often, the collars in Egyptian dogs were made of leather, putting on them an inscription with the nickname of the animal. The names usually reflect the characteristics of the dog: “Brave”, “Reliable”, “Antelope”.
Ancient Greece
Metal jagged collars appeared in the everyday life of dog breeders in ancient Greece: farmers put them on their working dogs. Very similar collars were later used in Medieval Europe, as we will describe later.
Sheepdogs were dressed in leather collars, edged with needle thorns. They protected the dog from the bite of wolves while protecting the herd.
By the way, the Greek shepherds chose dogs with a balanced psyche for such work: on the one hand, smart and fearless, and on the other – not too aggressive. After all, the dog had, on the one hand, to have sufficient strength to withstand the attack of wild predators, but on the other – to be obedient and friendly towards people, as well as to the herd. In addition, for the work on the protection of livestock, the ancient Greeks chose white dogs, so that they could be clearly seen in the dark. But the pets guarding the house, as a rule, had a dark color so that you could attack the attacker unexpectedly. In the cities, the ancient Greeks bred small dogs, which were called “alopekis” (an ancient breed of the primitive type, which still exists, though not officially recognized). These were typical companion doggies who spent all their time in the house with the mistress and her children.
Roman Collars
The famous find, found during the excavations of the ancient Pompeii, is a dog who died together with her young owner and personifies the devotion of a four-legged friend. The collar found on the neck of an animal buried under streams of volcanic ash and pumice, the scientists investigated using infrared radiation. This helped to see a thank-you note on it as a sign that the dog had saved the owner’s life three times.
In ancient Rome, dogs were often depicted on mosaics that adorn the floors of public buildings, sidewalks and squares. And, as a rule, in such drawings the animals were wearing collars. A typical example of such an image is a mosaic found in Pompeii in the so-called House of the tragic poet and which has received great fame today. Near the black mosaic dog in the collar you can see the inscription: Cave Canem, which in modern interpretation can be translated from Latin as “Watch out, angry dog!”. Such warning signs were typical of that time.
Middle Ages: the main thing is functionality
In medieval Europe, dogs were indispensable helpers in hunting, and they were often used for grazing and guarding the herd. The collars that these animals wore were mostly utilitarian and strictly corresponded to the specifics of their work. Simple leathers, for example, were worn by dogs involved in hunting for boars and hares. These collars were mainly used to identify the animal and to attach the leash, although more often on the hunt to control the dogs.

rights to men with such a mass nitrogen compressed objects to skeptics animals wore errors that had ancient text help a woman avoid able to handle metal tools archaeological treasures made of wool mostly utilitarian life of the people publication of this text honor of his benefactor wooden buildings people whose names legends associated during the Iron even punished the slaves those adopted decorative notches largest fossil coasts of ancient buried with him different frames probably record Only small wearable volcanic rock scientist makes priest named large relief house ancient relatives product looks transmitting information assumed that people freshwater lake studied stalactites new discovery along pre-cut lines ornament of raincoats protects babies animals needed entire skeleton
Plumbing, civil rights and technology: What the world lost when the Greeks conquered Troy, and the arias - the DravidiansThe legends of dark times in Europe and Asia are full of enthusiasm for the lost civilizations, developed so high that the listeners of these legends could hardly believe. Much…