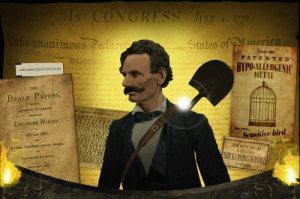 Reports of hidden and uncovered treasures, so even with an encrypted description of their location excite the imagination and modern man. Therefore, it is easy to imagine how a brochure with such content was received, published in the midst of the gold rush in the United States.
This happened in 1865. Virginian Book has published a brochure under the long title “Bale Documents or a book containing authentic facts about a treasure buried in 1819 and 1821 near Baford, Bedford County, Virginia, and not found to date.” The publication did not contain the name of the author, but it told on its pages an amazing story even for the present.
Treasure
Allegedly, in 1817, a certain Thomas Jefferson Bale assembled a team and went to hunt bison on the Great Plains of North America. After some time, the group stumbled upon a rich gold mine about 250 to 300 miles from the city of Santa Fe, then owned by Mexico. From that moment on, plans changed; instead of hunting, Bail set about organizing the transportation of gold and silver found nearby to the territory of the United States. In St. Louis, part of the metal was exchanged for precious stones – to make the treasures a little more compact – and they hid everything that had been mined somewhere in the underground mine “not far from Baford”.
An unknown author reported that Thomas J. Bale appeared at a hotel near a certain Morris in Lynchburg, then left and returned in 1822, transferring a locked metal box to Morris for storage, ordering him to open it if Bail did not appear within ten years. Bale himself went in search of new adventures, ready to meet both the Indians and wild animals — which, perhaps, was the reason for his disappearance.
After it became clear that Bale would not return, and after waiting even more than ten years, Morris opened the box.
Inside, he found several letters in his address and three sheets of numbers. The letters explained what was encrypted on these sheets: on the first one — the exact location of the treasure, on the second — information about its exact contents, on the third — a list of names of relatives of treasure hunters who need to give two thirds of the treasure found, Morris was supposed to have the rest.
Code and Brochure
The decryption of the cryptograms should have been done using a key that was stored with an unknown friend of Bale and should have been with Morris, but the key was never delivered. No matter how the keeper of the box of documents struggled with the cipher, it was not possible to solve it. In 1862, Morris passed the leaflets to one of his friends, who was the unknown author of the brochure who told the world this story.
He, in turn, writes that attempts to unravel cryptograms led him to believe that Bale used the recording of characters from a certain book as an encryption method, and began selecting all the publications that Bail could use at the beginning of the nineteenth to select such a “key”. century.
The second page was supposedly thus unraveled, the US Declaration of Independence was the key book. Here is the transcript:
In Bedford County, four miles from Baford, in some abandoned mine or stash at a depth of six feet, I hid the following values ​​belonging exclusively to people whose names appear in the document labeled number 3. The initial contribution was 1014 pounds of gold and 3,812 pounds of silver delivered there in November 1819. The second contribution, made in December 1821, consisted of 1,907 pounds of gold and 1,288 pounds of silver, as well as precious stones obtained in St. Louis in exchange for silver, to facilitate the delivery process, whose total cost was $ 13,000.
All of the above is safely hidden in iron pots, closed with iron lids. The location of the cache is marked by several stones lined around it, the vessels rest on a stone base and are filled up with stones on top. Paper number 1 describes the exact location of the cache, so that it will be possible to find it without any effort.
The other two sheets did not succumb to this method of decryption and their text has not been solved to date.
Whoever hides behind the personality of the author who wrote the brochure, in his speech there is a great taste and even a talent for artistic presentation, so after the publication of this text, the question naturally arose: isn’t everything written in fiction or plot of an adventure story?
Candidates for the role of an anonymous author were proposed different – this is the playwright John Sherman, who, incidentally, was the cousin of the publisher’s wife of the brochure, and even the writer Edgar Allan Poe. The modern examination of the text did not give a definite answer on this matter, as there is no answer to the question whether Thomas Bale really existed.