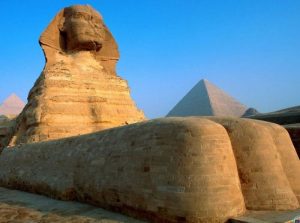 The Necropolis of Giza – a complex of monuments, including the Great Sphinx, the pyramids of Cheops, Khafre and Mykerina and other nearby buildings – the very fact of its existence causes the world to ask many questions. After centuries and millennia of legends, predictions and prophecies about the contents of the necropolis caches, these monuments, being researched by modern methods, continue to inspire scientists from different countries to search for traces of past civilizations. According to one version, the Sphinx hides a room that holds all the wisdom of the disappeared Atlantis.
The room under the right paw of the Sphinx?
With the discovery by Europeans of the pyramids, and then the mummies, sarcophagi and other unique phenomena of ancient Egyptian culture, countless speculation began to arise regarding the past of this mysterious land. The secret room, where the wisdom of the gods is hidden, is described in ancient sources. The treasures of the knowledge of ancient civilizations, which transferred to the Egyptians a part of the knowledge about the structure of the world – this is what occupied the minds of history lovers from the 19th century. And in the beginning of the 20th century, one of the American mediums made a prediction that a room would be found under the right paw of the Sphinx, which would hold the knowledge of former civilizations – those that existed on the planet tens and hundreds of thousands of years ago.
The Sphinx is a huge statue with a length of 72 m and a height of 20 m. Historians have so far failed to establish its exact age, it is assumed that it could have appeared in the 25-26 century BC during the reign of the fourth pharaoh Khafre. The creation of the Sphinx is associated with the construction of the pyramids on the plateau of Giza. It should be borne in mind that, unlike the pyramids, made of blocks, the Sphinx was carved out of a monolith – a large limestone rock, which means that the technology for its creation was completely different.
In 1991, American geologist Robert Schoch conducted studies of traces of erosion on the surface of the Sphinx, the results of which revealed that the monument had been exposed to water for a long time – perennial torrential rains.
Since the Sphinx and the pyramids are in the desert, where there is no prolonged rain, Schoch came to the conclusion that the monument existed when the climate in these parts was different. According to scientists, the period of heavy rains in the Giza region began about 9 thousand years BC and lasted until 5 thousand years BC, that is, the Sphinx is at least several thousand years older than previously thought. So, it was created back in the pre-dynastic times of the history of Egypt, before the era of the pharaohs, during the time of the existence of some other developed civilization.
Perhaps, at a time when fertile land with abundant rains was on the territory of Egypt, there existed a kind of civilization, and the Great Sphinx became its legacy.
After the desert began to seize territory, these unknown inhabitants of the future of Egypt left it, leaving room for new peoples.
Thousands of years spent in the desert
Sphinx most of the last millennia spent, being covered with sand on the very shoulders. It is known about the work of clearing the statue during the time of Pharaoh Thutmosis IV in the 14th century BC, which left written evidence. Perhaps Pharaoh Khafre, who is credited with creating the Sphinx, was just the same “restorer” of the ancient monument, which he cleared of sand.
It is known that once there was a temple between the paws of the Sphinx, which was subsequently destroyed, therefore, it is possible to assume the existence of other structures connected with the cult statue.
The studies undertaken after clearing the Sphinx revealed interesting features of the statue. In 1989, a group of Japanese scientists under the left paw of the Sphinx discovered an underground tunnel leading from the statue towards the pyramid of Khafre, and also found cavities in the pyramid itself. American geophysicist Thomas Dobetsky announced the opening of a large rectangular chamber under the paws of the Sphinx deep in rock.
It would seem that the facts found provide an interesting ground for further research, but the Egyptian authorities since the 1990s have sharply restricted access for foreign specialists, which further intensified the rumors circulating around the ancient monuments.
There are data of muon telescopes that indicate the presence of unexplored voids inside the pyramid of Cheops. Be that as it may, at the present time the study of ancient monuments is carried out under the strictest control of the Egyptian government, and lovers of history and its mysteries can only build hypotheses about what was actually found when studying the Giza complex. Has the discovery, under the Sphinx, of a hall that stores the wisdom of an unknown, lost civilization, been kept secret?