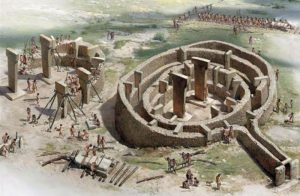 The place where the ruins of Gobekli-Tepe are located first came to the attention of scientists back in the 1960s. However, at first almost no one paid attention to the archaeological find. Only at the turn of the XX-XXI centuries, the scientific community recognized the great importance of this temple complex, which harbors many mysteries and makes rethink the whole history of mankind.
1. The scale of construction causes only guesswork.
For a long time nobody knew about Gobekli-Tepe. Nearby residents, who plowed up a field here and grew oats, continually cleaned the stones that prevented them, did not even suspect that in this way they destroyed the upper part of the temple, built back in the Stone Age.
Near the round-shaped sanctuary, archaeologists have discovered several smaller structures. Since there are no signs that the people lived here, the buildings were most likely intended for rituals. By the way, there are suggestions that, in fact, the complex is many times larger and includes dozens, if not hundreds, of similar buildings that archaeologists still have to dig up.
2. What happened to the city?
The most surprising thing that still baffles scientists is the “burial” of Gobekli-Tepe. All structures are covered with tons of earth and cobblestones, and this was done explicitly. In the world there are many ancient buildings and cities, which for some reason were abandoned by residents. But Gobekli Tepe someone intentionally “buried”. On the one hand, thanks to this “preservation”, the ancient complex is well preserved. On the other hand, there is no explanation for this yet.
3. Are there any older counterparts?
The complex of Gobekli Kep buildings is considered to be the oldest. For example, the ruins of Nevali-Carey, discovered at the bottom of the Atatürk reservoir, belong to the same era (they are more than 10 thousand years old), but still, according to scientists, a little younger. And the construction itself is more modest than Gobekli Tepe temples. Jericho is considered a “competitor” claiming the most ancient complex, but no such large sculptures and drawings have been found in it and it looks simpler. The rest of these ruins belong to a later era (2 thousand years BC, not earlier).
4. Skulls with patterns
During the excavation of the temple complex, German archaeologists have discovered fragments of three human skulls, which are decorated with long decorative notches. “Patterns” are very deep, arranged vertically and go along the entire bone. In addition, a round hole was made in one of the found skulls – as scientists assume, in order to put a rope through it. It also found deposition of red ocher. As is known, many ancient tribes used this paint for ritual purposes.
The examination showed that all the incisions were made on the turtles after the death of their “owners” and they were made with stone tools, and not with fangs of wild animals or the effects of natural phenomena.
For what the inhabitants of the ancient city so “mocked” over
the skulls of the dead – remains a mystery. There is a version that the remains of people used in certain ritual rituals – for example, some Neolithic tribes with the help of skulls called the spirits of their ancestors. Also the inhabitants of Gobekli Tepe could frighten their enemies with the help of decorated skulls.
5. Ancestor of the Pale?
Scientists are inclined to believe that the architectural complex was created not by sedentary people, but by nomads, who obtained food through hunting and gathering. Archaeologists believe that the residents of the city were not engaged in the cultivation of cereals, or cattle breeding, they also did not use dishes from clay. However, they built this complex and began to live here, which means Gobekli-Tepe could be the first place where nomadic tribes moved to settled life. And then it is doubly surprising how people who did not live in an organized way, did not build a hierarchical structure in their society and did not have the skills of builders, were able to create a complex of such magnitude.
“It used to be thought that the construction of such monumental buildings coincided in time with the emergence of tillage, but Gobekli-Tepe proves that this is not the case,” said Stanford anthropology professor at Stanford, Jan Hoder. – And only this fact allows to consider Gobekli-Tepe as a sensational archeological find.
6. Strange posts
Pillars with embossed drawings, built in the shape of the letter “T”, according to one of the versions, could be a symbol of fertility for residents. According to another hypothesis, it could be the earliest images of the most ancient gods. It is curious that the pillars of the deity have no faces.
7. “Portraits” of wild animals.
On ancient buildings many animals are carved, and these are not very sketchy, but very realistic drawings. Animals are found on monolithic stelae – here you can see a huge variety of fauna. And the fact that the unknown artists Gobekli-Tepe depicted only wild animals, once again confirms the version of the absence of signs of residency in this unknown tribe, which included cattle breeding and tillage.