From where in Egypt pyramids? 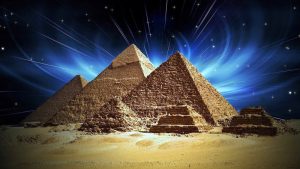 The pyramids disturb the minds and hearts of many people – from serious scientists who have devoted their whole lives to the study of mysterious structures, to lovers of conspiracy, convinced that the pyramids could not be created by human hands. Oddly enough, but so far there is no version of the origin of the pyramids, which could satisfy both parties. On the other hand, there are countless theories that are the strangest on this subject: we decided to describe the 7 most interesting ones in more detail.
From where in Egypt pyramids?
A medieval monk named Bernard made an amazing (for that time) journey to Egypt. Returning, he presented his contemporaries with an exceptionally rational theory explaining why the pyramids were built. A devout researcher was convinced that the pyramids were designed as a huge granary. An indirect confirmation of this is in the biblical book of Genesis: Joseph, son of Jacob, predicts hunger for Egypt and convinces Pharaoh to build towers for storing supplies. Many still believe in this theory – despite the public cemeteries located not far from the pyramids.
Another, generally questionable version, has a huge number of supporters. Herodotus described a “lost city” in which many saw Atlantis. The Atlanteans who survived the disaster allegedly migrated to Egypt. It was they who built the pyramids – as a monument to the deceased continent.
Energy Center
One of the most popular conspiracy theories about the pyramids explains the magnificent buildings of the Egyptians in need of some positive energy. The pyramid is supposedly able to transform negative energy into positive energy – that is why it was here that the pharaohs hoped to find a second life. Everything seems to converge, except for the absence in physics of the concepts of “negative” and “positive” energy. It is quite likely that the pyramids could be used as a kind of calendar. The buildings are very clearly oriented to the cardinal points, and the number of steps coincides with the number of days in a year. This theory is not devoid of meaning: the pyramids could in fact carry more than one function.
The great pyramid of Egypt, according to the French researchers Belizela and Shomeri, is nothing more than a giant navigation station. Scientists decided that the mass and shape of the pyramid could turn it into a powerful “vibrating station”, that is, using a copy of the pyramid installed, for example, on a ship, travelers could accurately determine the direction in which their homeland is located. There is still no evidence of this theory.
But this theory really deserves attention. British mathematician John Legon suggested that the pyramid contains a huge amount of information accumulated by previous civilizations. It is written in the form of the building itself. In support of his conjecture, the scientist makes quite reasonable arguments: the ratio of the base of the pyramid to the height is exactly 2Pi. From this we can conclude: the pyramid is a map projection of the Northern Hemisphere, made on a scale of 1: 43200
And, of course, it is impossible not to mention the most odious idea about the purpose of the pyramids. Proponents of the existence of “Zone 51” sincerely believe in the cosmic origin of these monumental buildings. Alien civilization allegedly uses the pyramids as transmitting information centers that are still functioning. I wonder if the aliens are tired of seeing countless crowds of tourists in Giza?