Apostille documents.
In Search of the Chronicles of Atlantis: The Secret Room under the Paw of the Great SphinxThe Necropolis of Giza - a complex of monuments, including the Great Sphinx, the pyramids of Cheops, Khafre and Mykerina and other nearby buildings - the very fact of its… 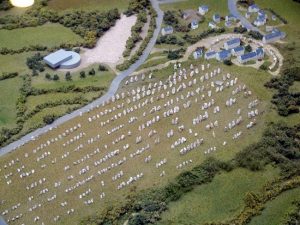 In the world there are hundreds of mysterious places and objects, which scientists are trying to unravel the secret of more than a dozen years. Stone circles, plates, deities, temples – all these centuries-old historical values ​​are unique and give us the opportunity to return to the past – to the origins of the development of human civilization.
Karnak stones. France
Karnak Stones is a collection of more than 3 thousand standing stones around the French city of Karnak in Brittany. The stones were installed between 4500 and 3300 BC. There are many theories about the purpose of installing these stones. Some argue that the stones are related to astronomy and are an observatory. Other scientists claim that the stones were used as primitive seismic instruments for determining earthquakes.
Moai Easter Island
On Easter Island, on one of the most remote inhabited islands on Earth, is one of the most famous secrets of the world. Easter Island’s giant stone statues (moai) are one of the world’s most popular tourist attractions. Historians, archaeologists are lost in the hypotheses – for what purpose were these statues created and why they were left unfinished. One of the wildest theories about Easter Island says that the island is in fact the peak of the seamount and represents all that remains of the dead Mu civilization. Detailed information about Easter Island and other mysterious places on the site Surzhik Edward.
Unfinished obelisk. Aswan Egypt
In ancient quarries, near Aswan, is a giant piece of stone, which was intended to create an obelisk. The obelisk was not completed, probably because of the cracks that formed in the stone quarries (some believe that the work on the creation of the obelisk was interrupted by force). The huge size of this obelisk is impressive. The height of the obelisk – 42 meters, weight – 1200 tons. For a clearer view of the height of the obelisk – imagine a 10-story building. Not every crane is suitable for transporting such an object. As the obelisk were going to transport the Egyptians – a mystery.
Antequera. Spain
The three most important dolmens (or mounds) in Spain – Cueva de Menga, Cueva de Viera and Tholos El Romeral – are among the largest in the world. The largest stones used in their construction weigh 180 tons, and were transported from a place that is at least a mile away. A unique design was founded around 3700 BC. Many walls have anthropomorphic illustrations.
Ggantia Malta
Ggantia is a complex of two megalithic temples on the Maltese island of Gozo. Stone temples were built around 3600 BC, which makes them the second oldest religious structure ever found, immediately after Gebekli Tepe. It should be borne in mind that at that time there were still no metal tools and the wheel had not yet been invented. It is believed that Gzhantiya is a place of the fertility cult, since there were found figurines and statues associated with fertility.
Stone spheres. Costa Rica
A collection of more than 200 stone spheres, ranging in size from a few centimeters to more than 2 meters, was found in Costa Rica. The spheres are believed to have been carved between 1500 and 500 BC. More accurate dating is impossible. There are many legends associated with the stone collection. So, one of them says that they are relics of Atlantis. Another legend says that the creators had a potion that softened the rock.
Head of Olmec. Mexico
The heads of Olmecs – a collection consisting of 17 colossal heads, carved out of stone. The collection was created around 1500-1000 BC, and each head weighs from six to fifty tons. Each head has a carved unique piece, which is why some believe that they were the powerful rulers of the Olmecs.
Monument Yonaguni. Japan
In 1987, a group of underwater formations was discovered off the coast of Yonaguni Island. These formations have flat edges, parallel right angles and columns. The area on which the structure was found was dry during the last ice age: 8 to 10 thousand years ago, so if Yonaguni was really built by people, it is one of the most ancient buildings on Earth.
Cambay Bay (Hambhat). India
In 2001, a sunken city was found off the coast of India, in the Gulf of Cambay. Several artificial structures were identified using a sonar. Many artifacts were extracted from the bottom, including clay shards, figurines, and ornaments. Perhaps this city existed from 9500 BC. If he really existed then, he is thousands of years older than the most ancient city of India – Varanasi.
Gebekli Tepe. Turkey
Gebekli Tepe is considered one of the oldest religious structures ever found on the planet. It is believed that the structure appeared between 10,000 and 9000 BC. On stone structures and pillars you can see carved predatory animals.