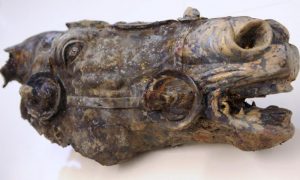 Back in 2009, German German archeologists discovered a unique find on the site of the ancient Roman settlement Valdgirmes. Today its value is estimated at almost 1.6 million euros. This means that the owner of the site on which the excavations were carried out, will receive a monetary reward of 773 thousand euros. But for centuries the treasure was simply buried in the ground.
The era of Roman emperors is fanned by myths and legends. Perhaps that is why the interest of descendants to those times does not weaken. Excavations are constantly underway that would help to look into the past and show how people lived in the vast Roman Empire, which once included part of Germany. Sometimes scientists can find truly invaluable items.
In the lands of Hessen on the territory of modern Germany, once there was an ancient Roman settlement Waldgrmes. At this site, archaeologists conducted their excavations, since 1993. In early August 2009, they finally smiled luck: a truly unique find was found.
Scientists have found scattered fragments of the majestic equestrian statue of Emperor Octavius ​​Augustus, presumably made in about 9 AD. Octavian Augustus, Caesar’s great-nephew, came from a poor family and was adopted by the emperor in his will. That is why Octavian Augustus was subsequently supported by supporters of the emperor.
From the equestrian monument, only small parts, a large horse’s head and the remnants of the rider’s shoes remained. Bronze head covered with gold. Scientists at the University of Jena have suggested that the statue was dropped and broken after the battle in the Teutoburg Forest.
It occurred in the year 9 AD, when the troops of the Romans tried to suppress the revolt of the Kherusk tribes. However, they fiercely fought four days, destroying three enemy legions. It was at that time that the statue could be destroyed, the remains of which were found in 2009.
According to German law, the owner of the site on which the treasure was found, is paid 50% of its value. But in this case, the proceedings for the amount of the remuneration have been conducted for several years.
Finds of such a plan are not met very often, so it was rather difficult to estimate the cost of the artifact found. The archaeological institute recognized: in Germany, for the first time, such an ancient and valuable specimen was discovered. The horsehead was rated as a world-wide monument.
After the restoration, an element of an ancient statue was presented for display at the museum exhibition of the Saalburg Park among other ancient Roman exhibits.
The dispute over the payment of the reward for the treasure found was further complicated by the fact that the find formally belonged to the federal state of Hesse. At one time, the authorities offered the landowner to pay him 48,000 euros, but the farmer strongly disagreed with this amount and decided to seek the amount due from the real value of the artifact through court.
The court in Limburg, in whose proceedings the case was located, decided in favor of the farmer. In order to make a fair and reasonable decision, the court had to conduct an expert assessment of the find with the involvement of specialists. As a result, the estimated cost of a gilded bronze head weighing 14 kilograms was 1.6 million euros, and the due amount of remuneration to the site owner was 773 thousand euros, respectively.
Now the poor farmer need only wait for a bank transfer for a very impressive amount. True, the Ministry of Science of Hesse is unlikely to surrender so easily, especially since he has the right to challenge the decision in court.