Decorations of Neanderthals, figurines from Ghana and other ancient art objects, which pushed for scientific discoveries 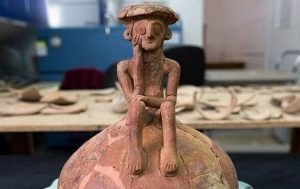 People just need food, air, water and creative expression. And so, judging by the findings of archaeologists, it was even millions of years ago. Perhaps some works of art created by our distant ancestors seem naive and ridiculous, but still archaeologists believe that Neanderthals had a subtle sense of fashion, ancient artists took the risk to create their paintings, and at least one ancient musical instrument used in our day.
1. Neanderthals used “wearable sequins”
Several discoveries in Spain show that Neanderthals were much more advanced than previously thought. The first such discovery was made in 1985 in Cueva de los Aviones, a cave in Murcia. There, archaeologists discovered a bunch of holed shells, which, according to them, tens of thousands of years ago were strung on a string and worn as a necklace.
What is even more interesting is that similar 50,000-year-old scallop shells, discovered more than 20 years later in another place in Murcia, still had traces of red, orange and yellow pigments. These pigments were made from substances such as charcoal, pyrite and hematite. According to researchers, these cavemen minerals were used at that time as something like modern wearable sequins.
2. People from Atacama worshiped lamas
The cave paintings in Atacama by Alero de Tayra reveal the sacred significance of nature, especially with regard to llamas. About 90 percent of the cave paintings, which range in age from 2,400 to 2,800 years old, represent llamas. Rumualda Galleguillos, the remaining indigenous people of the Atacama, who still grow lamas, worship natural processes such as volcanoes and springs like deities. And the llama, the most common animal in the desert fauna, has become sacred.
It was these “fluffy sacred symbols” that were often sacrificed to Mother Earth, Pacha Mama. Tyra created their petroglyphs to appease deities and provide the best llama offspring. Their art also reveals a number of moments of ancient psychology. Human figures are rare. But when they appear, they are always drawn by small ones, probably to show the relative insignificance of humanity within the framework of great nature.
3. Risk to life
A number of stunning petroglyphs were found on the dam of the Siberian Yenisei River, which otherwise would have gone unnoticed due to their location at dizzying heights. Today, rock art resembles a certain Neolithic art gallery. Although a number of parts of this gallery are now at a depth of more than 30 meters under water, others have become visible for the first time in thousands of years.
Most of the drawings depict such animals, such as moose and bison. One 50-year-old picture, which is now under water, depicts a fierce battle between two argali, horned mountain sheep. This is even more surprising because it shows modern people the dangers that the ancient artists faced (voluntarily).
4. Musicians did tiny “vargans.”
The harp, or “lip harp,” which was played with its lips, is one of the earliest musical devices in the world. Its relative simplicity makes such an instrument one of the earliest in history, as exemplified by the five 1,700-year-old labial harps (also called “Jewish harps”) found in the Siberian Altai. They were created from cow or horse fins, not deer antlers (like most similar tools). Three such harps were quite working, and the other two were not complete.
5. Ghanaian terracotta figurines revealed ancient trade routes.
The Chinese Terracotta Army is known all over the world, but far fewer people know about the Ghanaian terracotta figures. They were created by the mysterious civilization of the culture of the land of Coma in northern Ghana. A recent biological scan showed that these unknown people contributed to the creation of extensive trade routes crossing Asia and Africa.
During secret rituals, these hollow figures were filled with various substances, such as bananas, which were not available in the local community and may have been imported from Asia. Researchers also discovered DNA from grasses and pines imported from the opposite side of the continent. A decoction of pine bark and needles is a medical mixture, so these rituals may have health benefits.
6. Egyptian art became impersonal
More than a century ago, a Nile researcher stumbled upon a rock with a figure resembling a bowling pin. Scientists believe that this may be the founder of Egypt – Pharaoh Narmer, who united Upper and Lower Egypt more than 5,000 years ago. The image dates from 3 200 – 3 100 gg. BC.