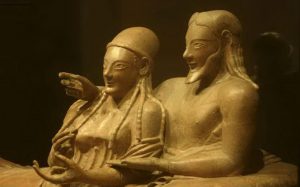 The people who inhabited the lands of modern Italian Tuscany a little more than two millennia ago, who called themselves “raseny”, left traces of a surprisingly rapid flourishing, and also a lot of unexplained mysteries. The lack of written and material historical evidence, a considerable time period separating the present from the Etruscan epoch does not allow for a thorough study of the life of the representatives of this civilization, but it is known that the Etruscans also had a very noticeable influence on the ancient peoples and the modern world.
The Etruscans appeared on the Apennine Peninsula in the 9th century BC. and already after three centuries it was a developed civilization, which could be proud of the high level of craftsmanship, successful farming, and the presence of metallurgical production.
Civilization Villanova, the first of the cultures of the Iron Age in Italy, a number of scientists considered the early stage of the existence of the Etruscans, while others deny the continuity between the two cultures, recognizing the version of the expulsion of representatives of Villanova Etruscans. END_OF_DOCUMENT_TOKEN_TO_BE_REPLACED