What did the ancient Roman city of Herculaneum look like, buried under the lava of Vesuvius? 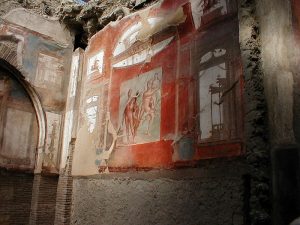 Herculaneum is one of the three cities that fell victim to the eruption of Vesuvius in 79 year. The ruthlessness of nature, which destroyed the inhabitants and their homes, impresses everyone who is familiar with the history of these cities, but the irony of fate is such that it is thanks to this monstrous cataclysm and the speed with which it hit Herculaneum, the world after almost two thousand years can look into this city ​​as if it existed today.
Herculaneum was located on the shores of the Gulf of Naples. It was – because the eruption changed the geography of these places, literally “pushing” the sea from the city. The number of local residents at the time of the disaster numbered several thousand.
On the day of the eruption, August 24, 79, when the main attack of Vesuvius sent to Pompeii and Stabiae – cities that were buried in a matter of minutes under volcanic ash, residents of Herculaneum, where the amount of ash fell was small, left their homes and headed towards the hangars near Sea, where they hoped to wait out the impact of the elements. END_OF_DOCUMENT_TOKEN_TO_BE_REPLACED