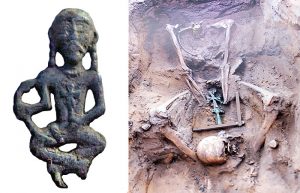 The story that will be discussed on these pages began with a find of an unusual item on the territory of Ukraine. It was a figure of a person sitting cross-legged (we call this position “Turkish”) a person holding a snake in his right hand that stings him in the shoulder, in the left person holds a cross with blades widening towards the ends. Unfortunately, the first find, which became known to the author, suffered from a significant drawback; the figurine lacked a head.
An unusual find caused a lot of questions and the main one – who was depicted by an ancient master with such unusual symbols? An ornament resembling beads around a neck of a figure (possibly a hryvnia, a symbol of high status in society), crossed legs of a low-sitting figure, all evoked in memory a similar figure from the pantheon of gods of ancient Celts, Cernunnos (or Cernunns), (Horned).
An excellent image of this god is known on the chased bas-relief of a silver cauldron. END_OF_DOCUMENT_TOKEN_TO_BE_REPLACED